Former construction worker and Alex Gibney source Tom DeVocht is good at building one thing—webs of lies and deception. During his time in the Church’s construction department he lost upwards of $10 million through his secret shady deals, phony work orders and disastrous financial management, all of which he kept hidden from Church officials and which, when discovered, led to his immediate expulsion from the religion. In fact, DeVocht’s philosophy was articulated in a public statement he made after his deceptions were uncovered when he said, “I would never even consider I was doing wrong unless I was caught out and then my only sorrow was for being caught.” More was later discovered about DeVocht. He was named in a newspaper as having conspired to suborn perjury and destroy evidence behind the backs of Church officials. No one knew until four years after he was expelled from the Church. Yet his con game didn’t stop there—he also carried it on in his personal life. He even ripped off his own wife’s grandmother on their wedding day, secretly sold his wife’s car, and stole money she inherited without telling her. All of this Alex Gibney conveniently hides from viewers of his film, dishonestly portraying this consummate con man as a “hero” while letting him build more of what he’s good at—lies.

But Alex Gibney’s idea of a documentary on the Church of Scientology?

Start with a book written by his buddy Lawrence Wright.

Then spend two years in secret turning that book into a film … and never once present any allegations to the Church.

And to ensure that the media would consider it tweet-worthy, find an expelled and embittered former Church member willing to make sensational claims.

Someone with a proclivity for lying and a bloated self-image with nothing to back it up.

Tom DeVocht didn't have a lot of bearing in the Church.

He didn't have a lot of authority.

I actually don't know what authority he did have.

And I was pretty familiar with who had authority and who didn't.

And his was just strictly on renovations and construction.

A construction guy who overstepped the bounds of his authority, created a series of financial disasters and connived for years to cover it up.

In a public announcement, Tom DeVocht gave the world a glimpse into the mentality behind his chronic deceit – the mindset of a criminal, “I would never even consider I was doing wrong,” he wrote, “unless I was caught out and then my only sorrow was for being caught.”

But before his deceptions were discovered, Tom DeVocht talked his way into supervising some of the Church’s various building projects.

Colleagues would later discover that DeVocht was hiding his financial misconduct behind a complex web of lies.

“Tom DeVocht messed up a lot, financially within the Church when it came to construction and renovations. There were two specific projects I was involved with. To say, I guess, that they didn't go well was an understatement.”

“He had left this trail, like slime; things that had to be rebuilt, replanned, redone, refigured out, re-researched.”

“And through his incompetence, because he didn't have a clue what he was doing so he'd never get planning approved, never get budgeting done. He would just go ahead with projects and then constantly change them.”

“I had the assignment of tallying up all the change-orders from one of these projects that he was working on. And it was astronomical.”

“Over-expenditures in terms of hundreds of thousands of dollars on one particular building.”

“He had given authorization for things to be done that were not approved by the Board. And it was very evident he was dishonest.”

“And he thought he was above the law. And when caught out on such, he would lie. Bills would be coming in and he would cover them up. He was a financial nightmare.”

Committed to a multimillion-dollar loan guarantee-sticking the Church with the tab when the loan defaulted.

Engineered a disastrous land deal benefiting a known felon that cost the Church a million dollars.

But DeVocht got a perk out of the deal—he scored tickets to a pro football game.

All from a man who would later disclose this about his stunning lack of moral character. “Lying was not wrong unless I was caught out and couldn’t lie my way out of it.”

And when piles of bills and internal audits made it impossible to hide the truth any longer, DeVocht admitted all in a public announcement: “I operated insanely, spending money with no responsibility for what I was doing and no concept of the destructive consequences.”

Alex Gibney mentions none of this.

Nor does he mention that a closer look into Tom DeVocht’s life reveals an even wider and more reprehensible pattern of undisclosed antisocial conduct.

DeVocht stole cash from his bride’s grandmother at their wedding.

“There really isn’t anything much lower than stealing from my grandmother on our wedding day. It doesn’t get worse than that.

“But then he sold two of his wife’s cars without her knowledge, while she was out of town; I returned home. My girlfriend picked me up at the airport. We drove back to my apartment. I turned to her and said, ‘Where’s my car?’

And he squandered $100,000 of her inheritance, without bothering to mention it.

“He would leech off me and my family, who provided him an incredible life, whether it was the Armani suits my mother bought him, the beautiful vacations that my family took us on with them. And he took advantage of it. He betrayed me, he betrayed my family.”

But that was just a warm-up for what was to come.

For Tom DeVocht not only steals money from women.

He also likes to knock them around.

Including his own wife, whom he once violently battered.

“It was in a work setting and I said something and he didn't like it. And my hair was pulled back in a ponytail.

“And he grabbed the ponytail and whipped my head down towards the floor and dragged me, literally like a caveman, down a hallway until people started screaming at him and made him stop.”

Needless to say, that was the end of that marriage.

But far from being remorseful about his violent streak, which extends to attacks on several colleagues, Tom DeVocht actually boasts about it, “I drove fear into people with my physical handling of people,” he said.

“I beat up some people…”

Most of it in tandem with that failed Texas cult leader—Marty Rathbun.

“In the last months when he was hooked up with Marty Rathbun, not long before he left the Church, he became increasingly aggressive, increasingly bizarre and violent.”

“Rathbun and I,” he admitted, “were working together as close friends and beating up people.”

One of them, strangely enough, was Marty Rathbun’s sidekick, Mike Rinder.

“Mike Rinder, Tom DeVocht and Marty Rathbun were not only violent to others, they were violent to themselves.

“It was strange. There was one incident where Tom DeVocht went into a psychotic rage and went down and saw Rinder and grabbed him, shoved him into an oleander bush. Stumbled, because Rinder tried to grab him.

“But then DeVocht—even more angry—started kicking him in the ribs, in the side. And Rinder was begging for mercy. It was a gross scene until he was pulled back. It was just a psychosis.”

His accomplices, once again, Marty Rathbun and Mike Rinder, who hid the conspiracy from Church officials for 14 years—until Rathbun finally outed them all to a reporter.

These same three, all given major roles in Alex Gibney’s film.

But Gibney doesn’t seem to care that lying to law enforcement is a felony and had DeVocht been caught, he could have spent five years in prison.

Inevitably, Tom DeVocht’s lies and antisocial acts caught up with him.

And when they were discovered, he was removed and dismissed in disgrace.

But Tom DeVocht’s bitterness at being dismissed would fuel a vendetta against the Church.

First, on a media tour in support of Rathbun's cult.

And, when that failed, using forcible means to harm actual Scientologists.

Including a deprogramming attempt against a young Church member visiting from Australia, lured to a house where she was held against her will, threatened and verbally abused by DeVocht and seven others.

“And that minute I knew that like something was wrong. Like I was scared. Then they all come outside and now I’m cornered. You know. Cornered in the sidewalk of the house. So then Tom DeVocht comes out.”

“He said, ‘If you were my sister, I’d tie you up right now.’ And that’s what freaked me the hell out. I mean, ‘You’d tie me up because of what? Because I’m a Scientologist?’”

But nothing would quell DeVocht’s bitter crusade for revenge over the good life he lost. And so, Tom DeVocht next turned on his own family, still members in good standing with their church.

Remember the sister he talked about tying up? He tried to turn her own daughter against her.

“It’s ludicrous because he never even knew my daughter, never. You know, he met her maybe once in thirty years, for a few minutes. And then, now he tries to put a rift between her and I.

And I think that’s the meanest thing that a brother could absolutely do to his family. To do that is so mean. What kind of a person would do that?”

That’s Tom DeVocht—a featured player and now spokesman for Alex Gibney’s "documentary", who repeatedly stole from his wife and her family, engaged in a ruthless campaign of violence against his colleagues, and through his willful incompetence, cost the Church millions.

“I guarantee you right now, the guy owes hundreds of thousands of dollars to people he’s ripped off, people who he’s conned, they’ve given him money, whatever business endeavors he’s tried to get into, they’ve all failed.

“He sucks off of people, he drains them. He cons them to, to believe in him in some way. They give to him—give, give, he takes, takes, takes. And he never gives back. And he bombs every time. And he’s a failure.”

And so it goes with Alex Gibney’s idea of a documentary … ignoring all evidence: court documents, police records, testimony of family, former friends and colleagues, anything that doesn’t fit the story he wanted, while including only the long-discredited fabrications of his small handpicked crew of bitter expelled Church members and their cronies.

Remember this guy—the leader of that tiny failed cult?

He has repeatedly admitted under oath to perjury.

You’ll also meet those this man calls his “posse.”

He confessed under oath in a court proceeding that he couldn't even calculate the lies he told Church officials before he was finally removed.

And the drama queen who regaled Alex Gibney with a tale of an “escape” that never happened.

But Alex Gibney isn't revealing who his prized sources really are.

And for obvious reasons.

It’s not the truth. 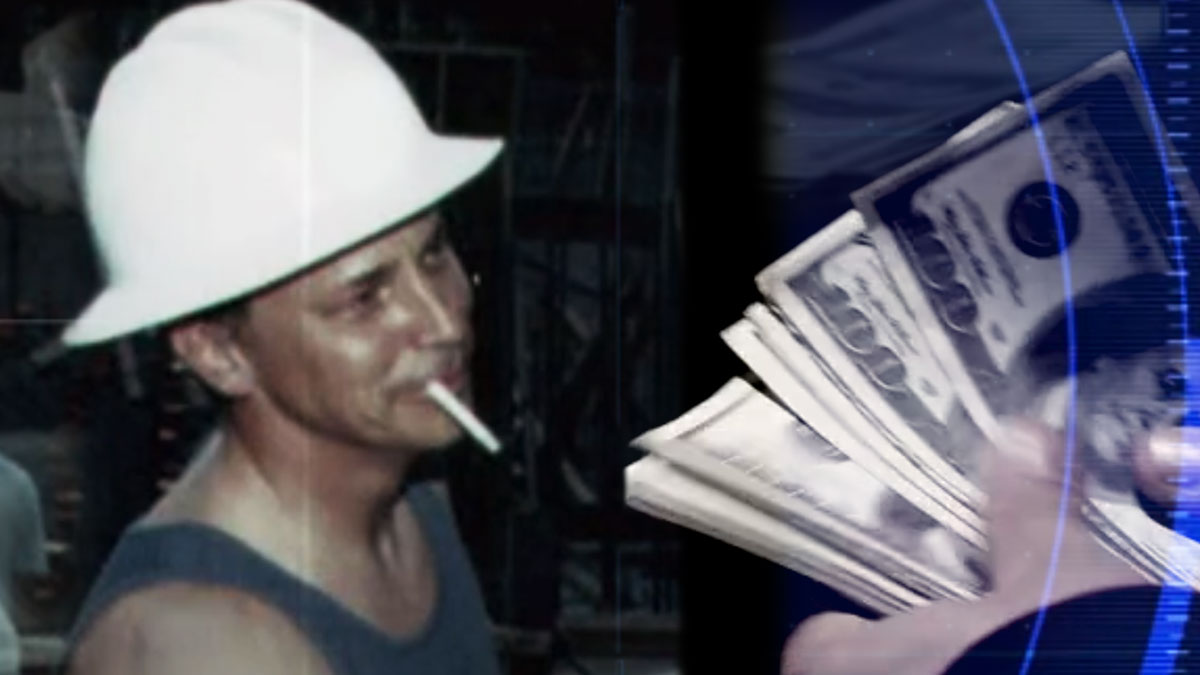