Mike Rinder Asleep at the Switch

Watch this video to see the reactions of Mike Rinder’s former co-workers to his constantly falling sleeping on the job, in meetings or when rehearsing a speech. “Rip Van Rinder” became known as someone who could literally sleep through anything, making others do his work for him.

Alex Gibney and HBO anointed as the poster boy for their new film an admitted liar who was expelled from the Church, Mike Rinder. It’s accurate to say he dreams up new myths and lies, given he’s usually asleep. Rip Van Rinder has perfected the art of nodding off and laziness. His former colleagues tell stories of Rinder falling asleep anytime, anywhere. And no, it’s not because of any medical condition. He readily admits he doesn’t like to work. So when it comes to Mike Rinder and his lies, one must always go in with eyes wide open. Even if Mike Rinder can’t.

A featured source in Alex Gibney’s video on the Church of Scientology.

A man expelled long ago for malfeasance, criminal activity, incompetence, lying and laziness.

Which is legendary and well documented.

I think the epitome of Mike Rinder is he was lazy.

He was absolutely lazy.

All he did was refer things to other people.

And get away with things. And you know, he never did any work himself.

He’s not a productive person. He is very lazy.

It was common knowledge that when you went up to his office, in just about every case, whatever program he was meant to be working on, he wasn’t doing it.

This was sheer slothfulness.

There was no other cause or justification other than his own laziness.

Mike Rinder does not, has not, and never will work.

And Rinder admitted to it all in a public announcement.

“I was very lazy and did everything based on the ‘seat of my pants’” he wrote.

“I avoided responsibility by deliberately remaining ignorant of situations.”

Yes, Mike Rinder had more important things to do.

And does Rinder ever love to sleep.

He’ll do it anywhere, at any time and in any position.

Mike Rinder was notorious for falling asleep in the most unbelievable situations.

You know, like there’d be a really energetic, enthusiastic meeting going on about something and he’d be asleep.

He had absolutely no problem, no qualms, no hesitation in just nodding off.

He had perfected this technique of sitting in a corner and you know with his back to the rest of the room and he would look like he was just in the corner reading something and you’d go around and he would be asleep.

I would cough or you know, make a motion.

You know, something, to get him to wake up or to be startled or something.

That happened a number of times.

It just became a joke after that. Like, Sleepy Mike, you know, like sleeping on the job again.

I guess you would just call it incorrigible.

Sleepy Mike Rinder has admitted to this close personal relationship with Mister Sandman.

“I fell asleep at my desk many times,” he wrote.

“I am now known for falling asleep.”

In fact, Mike Rinder will float off to Dreamland at the most unlikely moments: Rinder fell asleep while playing a short informational video for a reporter.

He nodded off at a conference table during a deposition; and when charged with prepping legal documents for a court presentation, he was instead found snoozing.

Here he is getting some beauty rest while supposedly rehearsing a speech.

And no, he’s not suffering from a medical condition.

When not hugging his pillow, Mike Rinder has been spending his time failing at a variety of jobs.

He lost his job at a marketing company after getting nothing done.

Then he got a job at an ice cream store, and lost that one, too.

Here to spin the latest tale he’s dreamed up.

If you can rouse him from his slumber. 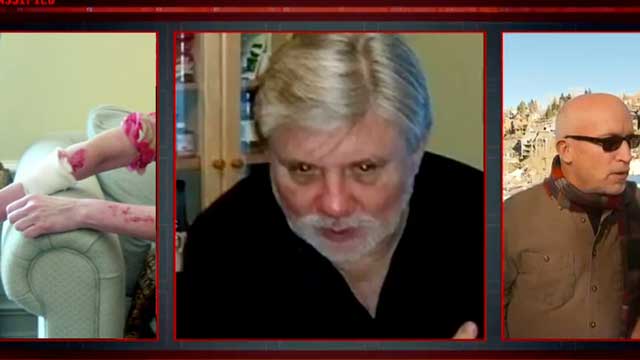