Lawrence Wright and Alex Gibney have recycled Paul Haggis once again as a go-to anti-Scientology source.

Given Haggis’ career has been in a free-fall for most of the last decade, this comes as no surprise. Whenever he is about to release a film, he cynically uses Scientology as a publicity tool to get attention.

Nowhere was this more blatant than in 2009 when Haggis orchestrated a media event built on three lies about his alleged “departure.” He claimed that 1) he was leaving the Church—although he had not been involved in it for two decades; 2) he left because he alleged the Church supported the Proposition 8 same-sex marriage ban when that was entirely untrue—the Church’s tax-exempt status prohibits it from taking a position on any political issue; and 3) he did an “investigation” into Church practices and found things he didn’t like, when all he did was read falsehoods on a blog by anti-Scientology zealot Marty Rathbun.

The Haggis lie about his “break” with the Church was confirmed by his own sister, television writer Kathy Haggis. She wrote to The New Yorker editor David Remnick about Haggis’ claim: “…I found it hard to take seriously since, to my knowledge, he had not had any significant involvement in Scientology for over 20 years and hadn’t made any meaningful progress in the study of the religion since 1977.” (See Kathy Haggis letter to David Remnick .)

The Haggis lie about the Church supporting Proposition 8 was obviously intended as an incendiary accusation against the Church. But it is completely refuted in that, as a 501(c)3 organization, lobbying on political issues is severely restricted and as a matter of policy, the Church as an organization does not engage in political activity at all. So the Church not only did not take a position on Proposition 8, it couldn’t. It was clear Haggis was unfamiliar with such matters, because he tried to publicly pressure the Church into taking sides on the initiative when it was prohibited from doing so, and he was told this. Nonetheless, Haggis turned a single unauthorized letter sent by one Church member in San Diego expressing his own personal opinion into his “smoking gun” to fuel his media stunt. As further evidence of his hypocrisy, Haggis has continued affiliations with the Catholic Church without creating a public spectacle on their well-known stance on same-sex marriage.

In addition to falsely accusing the Church of Scientology of homophobia, Haggis further claimed he had “investigated” Church matters when in fact, he had only read the disjointed, crude ramblings of Marty Rathbun, an unreliable lunatic drummed out of the Church a decade ago for malfeasance. In doing so, Haggis cited not one piece of evidence for any of Rathbun’s accusations against the Church and its leader, all of which were hearsay. Rather than do a real investigation, Haggis stuck to the script dictated by Marty Rathbun and C-level actor Jason Beghe, Rathbun’s first client and the poster boy for his failed “independent” Church experiment.

Anyone who knows the history of Paul Haggis wasn’t surprised at his lies. His sister Kathy worked on projects with Haggis and was with him from the very beginning of his association with the Church. She says that Haggis “was always a liar” dating back to their childhood. She added that he has a long history of a) using others; b) using Scientology to cynically advance his career; and c) grabbing undeserved credit for work done by others.

Haggis even lied to his relatives with a phony excuse for why he and Lawrence Wright launched a hit piece in the New Yorker against the Church and its leader. Kathy’s husband says that Haggis told him at a family wedding that Wright had promised him a New Yorker profile in time for the release of his flop The Next Three Days, but only if he unloaded his venom about Scientology—since no one was interested in Paul Haggis himself. Wright went on to label Haggis his “donkey” who enabled him to tell his tale, although he no doubt misspoke. Arrogant “jackass” is a more appropriate term.

Perhaps the incident that most fully illustrates Paul Haggis the hypocrite occurred after the devastating earthquake in Haiti in January 2010, which the Church responded to by sending scores of Church Volunteer Ministers and Haitian-American doctors and nurses in a humanitarian mission to help the stricken country. Haggis had just created a public spectacle about leaving the Church and how much he hated everything it does. Then he selfishly exploited the ministers by piggybacking on their humanitarian efforts in Haiti, where he went for a photo op, by hitching a ride on a plane chartered for Church volunteers. Of course, no one knew who he was because he hadn’t been in a Church for years. Haggis no doubt thought it was funny, but he bumped a hard-working volunteer for his own comfort, proving how disingenuous his comments about the Church had been. Out of one side of his mouth he professed to hate the Church and its members, but out of the other he was happy to exploit them. This is nothing but disgusting. As his sister Kathy wrote to Lawrence Wright before publication of his New Yorker article:

I don’t suppose Paul mentioned that, after he so publicly ‘resigned’ from the Church with his sweeping indictment that all who adhere are bigots, he surreptitiously stowed away on a Church-chartered flight from Haiti to Miami (one of the very few flights available) so that he could more quickly return to his comfortable life, after a mere 3-day visit. Many of the volunteer ministers on that plane (the “bigots,” you understand) had been slugging it out for weeks in impossible conditions, risking their lives to help others—average people, not multimillionaire celebrities. Once again, it seems Paul had no trouble using the Church if it suited his purposes. Of course, my Church had the grace to not even mention the irony of this to Paul, and ignored his actions.

Haggis once again trotted out his anti-Scientology venom in 2014 to promote his dud Third Person. The culmination of his insane claims about the Church was manifested in an interview where he accused Church members of secretly posting anonymous comments on the Internet trashing his work. No matter that this was delusional—it was the critics who were teeing off on Haggis. According to Rotten Tomatoes, his film received just one star, negative reviews outnumbered positive reviews 3 to 1, and critics shredded the movie en masse with such comments as “The storytelling is infuriatingly coy, as if Mr. Haggis were trying to fool you (and himself) into thinking that he has something to say.” (Stephen Holden, New York Times)

All of this underscores what the Church has said before: Paul Haggis is a selfish status-obsessed screenwriter who cannot be trusted and whose only interest is doing anything it takes to get attention. In the words of The Hollywood Reporter, he has been in “the wilderness” professionally and yearns to be relevant again. In the past, he took advantage of Scientologists to gain work and money, including more than $5 million for projects that never materialized. It’s no wonder he is desperate now. And the desperation gets worse and worse as each successive film fails.

The information about Haggis has been known for four years. In 2011, the Church published a special edition of Freedom Magazine responding to the lies in Lawrence Wright’s The New Yorker article, spread by Haggis and the small group of anti-Scientologists supporting him.

Mr. Gibney cannot claim to be unaware of the facts contained in this publication and accompanying videos, as he commented about them on his Twitter account. Everything the Church said in that magazine turned out to be true, but it is being ignored.

In the four years since Wright’s article was published, the Church has continued to experience explosive growth. What the Church said then about Marty Rathbun (that he’s just a con man and wannabe cult leader) and his “posse” has turned out to be true, with his entire “independent” experiment collapsing. Not only that, continual acts of violence on Rathbun’s part have been documented.

Yet HBO made a documentary based on Wright’s Going Clear book. The allegations in Wright’s book were stale then, and are even more stale now. To this day they have no independent corroboration. But the book came from the article, and the film comes from the book. And the article was already eviscerated in 2011 as fabricated, which means both the book and film have been too. Yet producer Wright continues to ignore the extensive evidence the Church presented, including video evidence.

The Haggis story about Scientology is a fraud. That anyone showcases his bigoted claims in an article, book or movie is unconscionable. All the Church of Scientology ever was to Paul Haggis was a shortcut by which he could use others for his own selfish goals. Having recently cut a deal to direct a miniseries for HBO, it’s obvious Haggis’ participation is just quid pro quo, the result of which will spread hate in the name of corrupt corporate synergy. 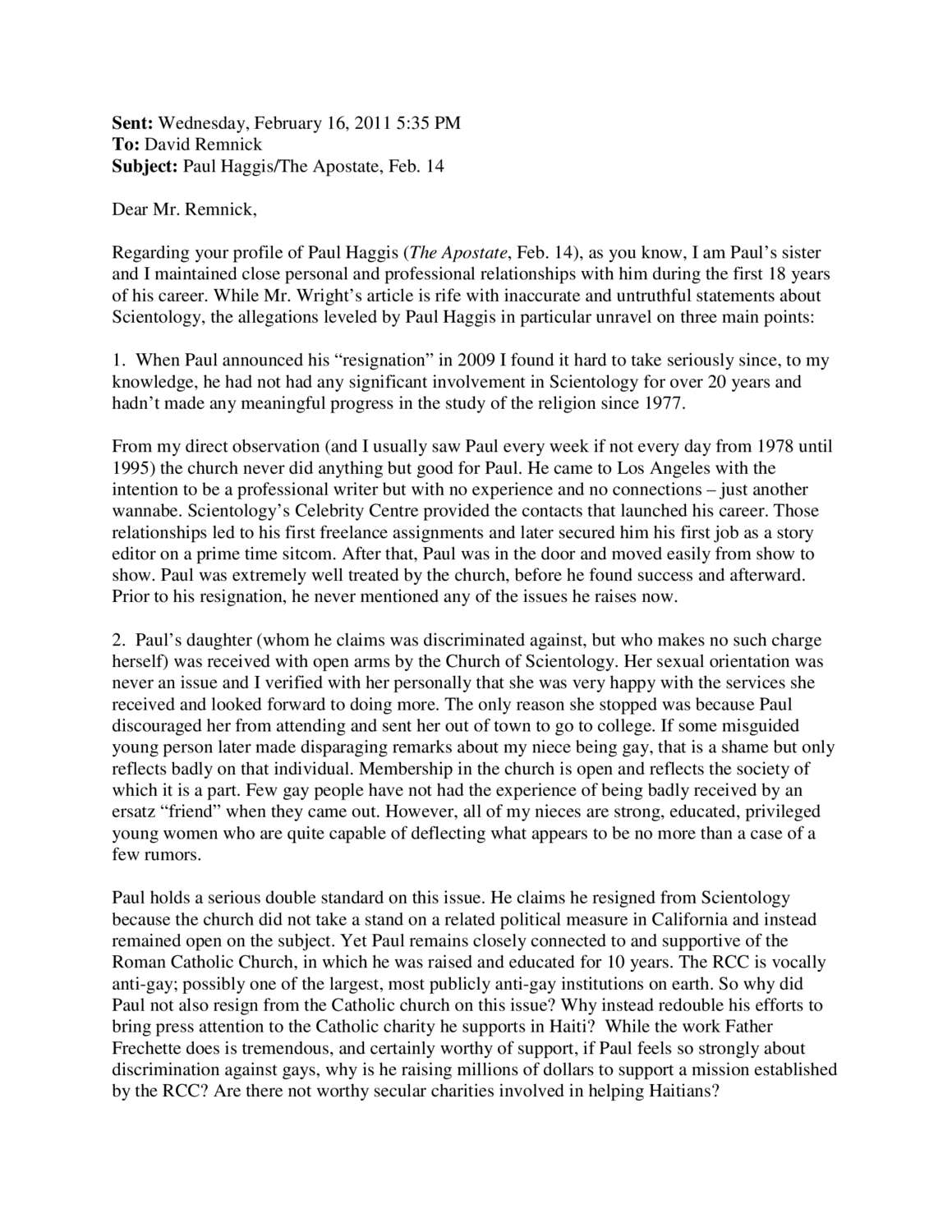 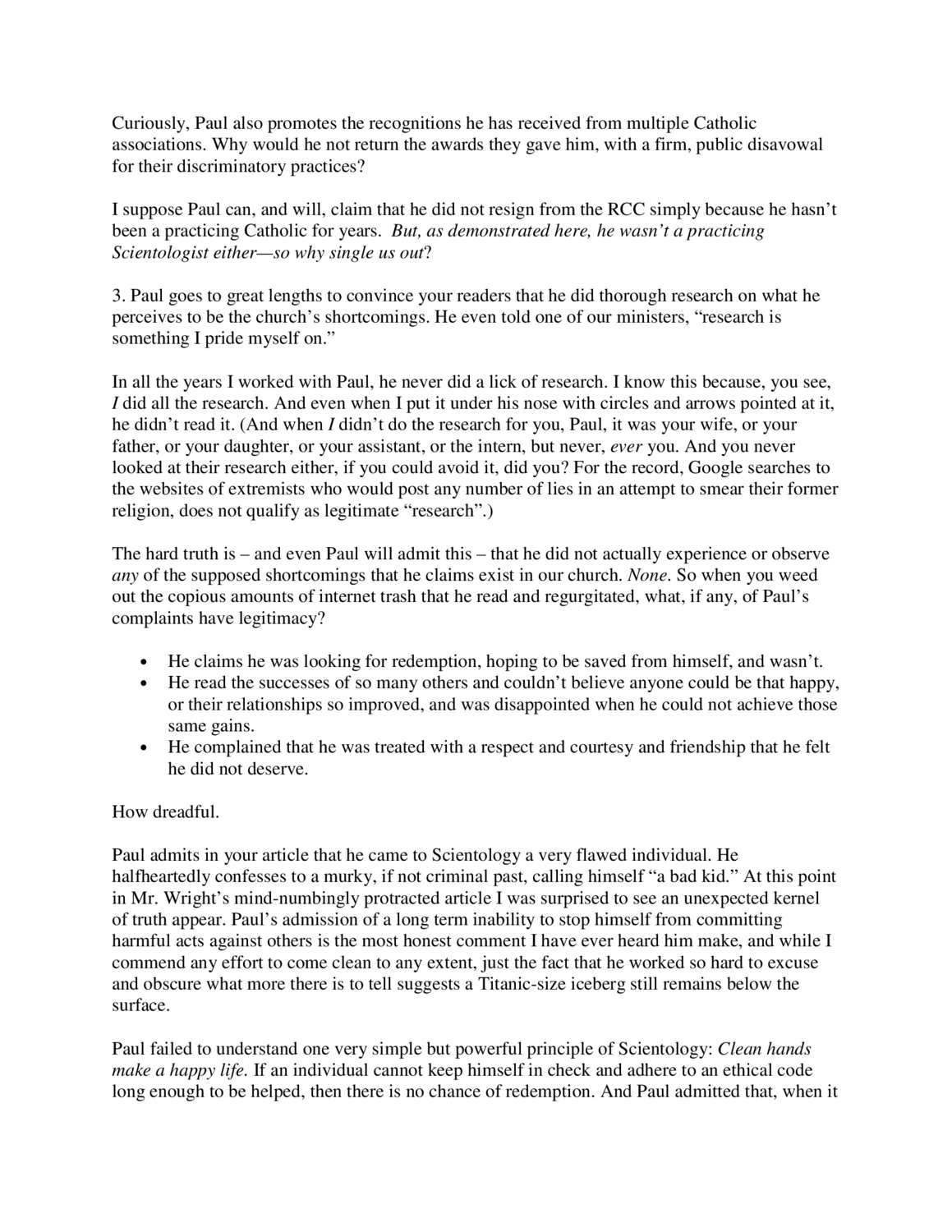 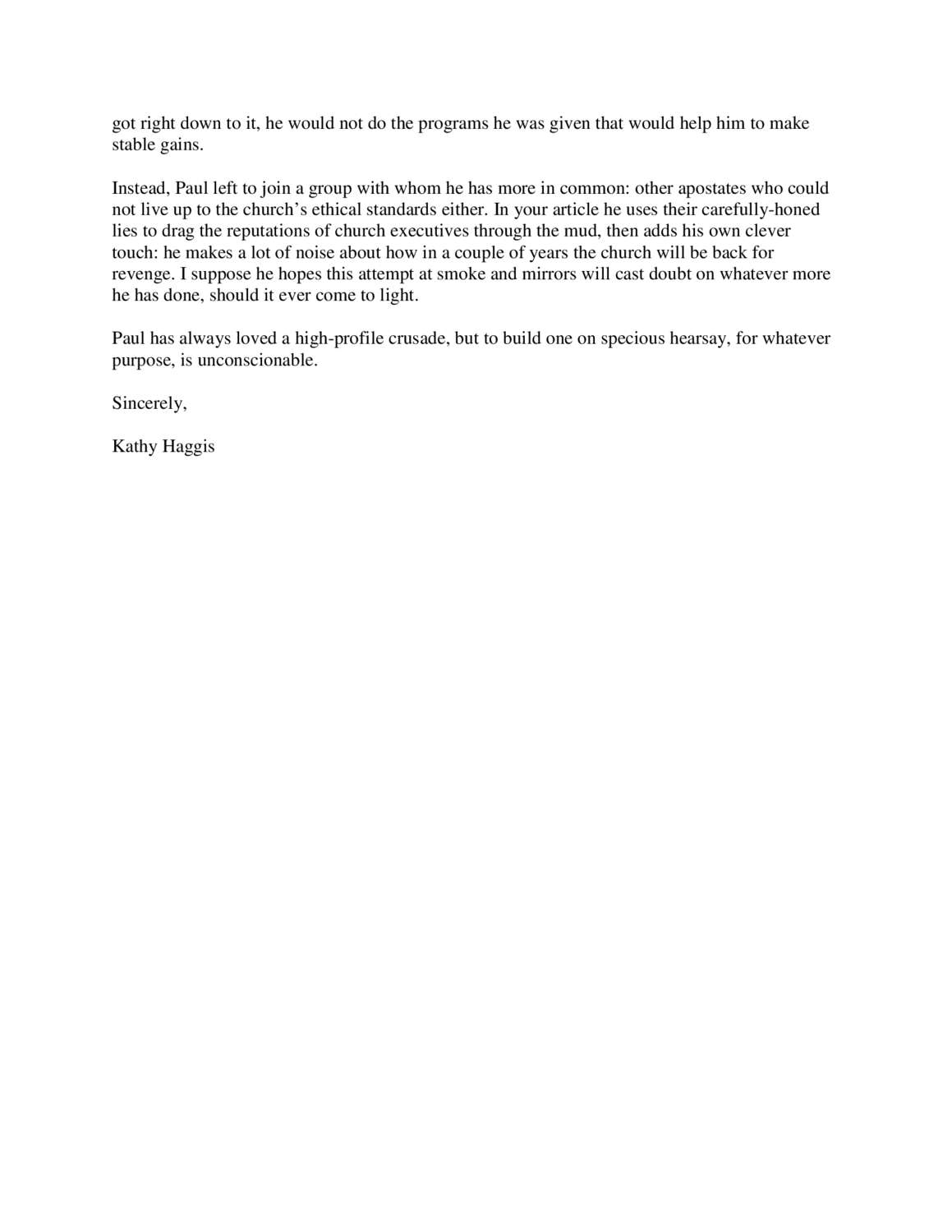