and he learned at the feet of a master

Latest from the Blog

In his classic novel 1984, author George Orwell described the technique of propaganda: “To tell deliberate lies while genuinely believing in them, to forget any fact that has become inconvenient, and then, when it becomes necessary again, to draw it back from oblivion for just as long as it is needed, to deny the existence of objective reality and all the while to take account of the reality which one denies.”

Going Clear is yet another Gibney rehash of false, stale and unproven claims. Virtually every allegation in the film was promoted for years by the same handful of embittered malcontents in the pages of the struggling St. Petersburg Times (now Tampa Bay Times) as part of its inflammatory anti-Scientology agenda. It was later regurgitated by Gibney’s co-producer Lawrence Wright for a New Yorker article and book before ending up as the substance of Gibney’s film.

See more on the blog

Philip Alexander Gibney, son of journalist Frank Gibney whose career was tainted by his secret ties to the CIA in writing a book on a Russian spy, is an American documentary film producer and director. Alex Gibney churns out films that have been increasingly criticized for going for the cheap buck via sensationalism. Whether the subject is Scientology in Going Clear: Scientology and the Prison of Belief or the late Apple founder Steve Jobs in Steve Jobs: The Man in the Machine, the common criticism is that he specializes in one-sided hatchet jobs. In Going Clear, Gibney produced a film on a new religion that he never would have produced about the Jewish faith. Imagine if one produced a documentary about Jews. Instead of interviewing rabbis, Jewish leaders and scholars and everyday members of the faith, it uses as its sources and interview subjects outspoken anti-Semitic bigots who sue synagogues, operate anti-Semitic blogs and regularly express to the media hatred toward Judaism. That is effectively what Alex Gibney did. Click here to learn more and to watch the videos produced by the Church of Scientology.

Letters to Alex Gibney and Sheila Nevins regarding Going Clear: Scientology and the prison of belief

Alex Gibney of Jigsaw Productions, Lawrence Wright from the New Yorker and HBO spent more than two years producing the one-sided Going Clear: Scientology and the Prison of Belief. At no time was the Church of Scientology contacted until the very last minute when the film was for all intents and purposes finished. Gibney never even asked to visit or film inside a Church of Scientology or Church property. When the Church asked for a fair and reasonable opportunity to respond to any allegations, it was arrogantly dismissed. Instead, Gibney relied on lies and hate speech churned out by the usual collection of bitter individuals kicked out of the Church for malfeasance who now make a living spreading false information about the Church. Furthermore, Alex Gibney and HBO never once told the Church of Scientology any of the allegations they used to build their propaganda. See for yourself the barrage of letters asking for a fair opportunity to address allegations that were sent to Alex Gibney and documentary producer Sheila Nevins of HBO. The bias is eye opening.

Letters from the Church 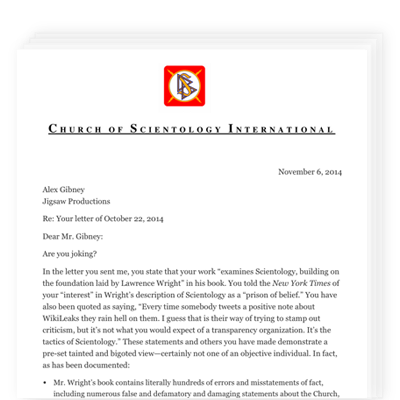 See more than a dozen letters sent to Alex Gibney and HBO from the Church of Scientology International with a simple request for a meeting to address allegations in Going Clear: Scientology and the Prison of Belief. All were ignored. 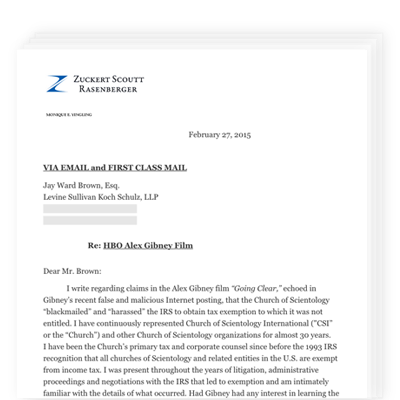 See the letters from Church counsel sent to Alex Gibney and HBO related to allegations and falsehoods in Going Clear: Scientology and the Prison of Belief, all of which were only discovered after the film premiere since they stonewalled all efforts to get a fair opportunity to address them in advance. Each of which clearly lays bare the details Alex Gibney refused to listen to. 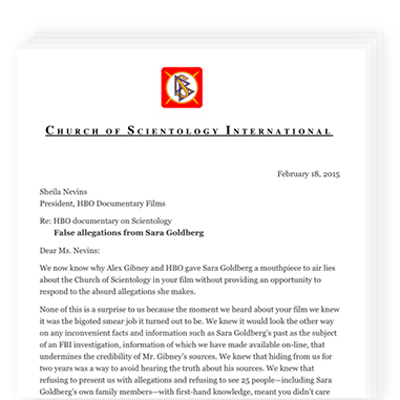 Each of these letters details the false allegations made by Alex Gibney’s sources in Going Clear: Scientology and the Prison of Belief documentary, their history of lying and hidden financial agendas. But Alex Gibney and HBO turned a deaf ear to any efforts by the Church to get a fair opportunity to respond. Check out the documented facts discrediting his sources. 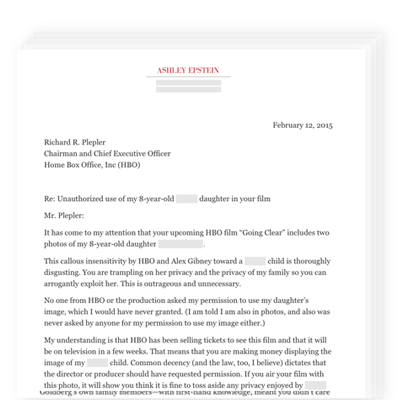 See the letters sent to HBO from the family members of Alex Gibney’s subjects in Going Clear: Scientology and the Prison of Belief. All were available and eager to speak with Alex Gibney to refute claims made by his subject. But Gibney and HBO refused.

Learn about those Alex Gibney uses in his film to forward his anti-religious and anti-Scientology propaganda. This includes the many anti-Scientology sources Lawrence Wright used in his book Going Clear: Scientology, Hollywood and the Prison of Belief who are so discredited Wright’s book couldn’t be published in the UK, Canada and Australia due to libel laws. In spite of this, Gibney uses each of these sources because their tales are “sensational” and uses celebrity names to garner attention from the media. While the truth on each of these individuals may seem harsh, every bit of it is based on documented facts you will see provided throughout the pages and videos. These are provided with the intent of exposing who these individuals truly are and why Alex Gibney, producing a documentary based solely on their lies, is purely a “PROPAGANDIST” in the deepest sense of the word. Meet each of them here: