Watch the video for the story Alex Gibney refused to tell. The facts in this video explain why Alex Gibney deliberately avoided learning the truth about Marty Rathbun and his history of lies, deceit and violence.

Meet Marty Rathbun, put on a pedestal by Alex Gibney. Only problem is Rathbun is an unstable individual and self-admitted liar whose honeymoon suite was the New Orleans City Jail. Then there was the time he admitted he suborned perjury and obstructed justice. Not exactly sterling material. More important, he’s a self-proclaimed leader of a handful of zealots expelled from the Church years ago for malfeasance. Lawrence Wright knew all that before publishing his book. So did Alex Gibney, who also looked the other way.

Rathbun’s financial tactics include using his wife to sue the Church. Rathbun was removed from an external affairs position a decade ago following malfeasance that he estimated cost the Church $43 million. In a deposition on December 22, 2014, Rathbun was asked “Did you lie under oath in declarations?” and “Did you lie under oath in affidavits?” His answer to both questions: “Probably.” Making Rathbun a perfect source for Alex Gibney. Leave it to Going Clear producers Lawrence Wright, Alex Gibney, Kristen Vaurio and HBO’s Sheila Nevins to bet their credibility on a self-confessed liar. We’re just glad to be rid of him.

Marty Rathbun may see himself as a peaceful and honest good ol’ boy who wouldn’t harm anyone.

But if he took a good look in the mirror, he’d see his true image – an unhinged leader of a small south Texas cult – a man with a militia mentality and a long history of violence.

“I've had the unfortunate experience of having witnessed Rathbun’s love affair with violence.”

“I observed Rathbun in a rage, throwing him up against a filing cabinet repeatedly and screaming at him…”

“I saw him grab a guy and him throw him against the wall so hard the whole building shook.”

“The impact of the assault was so strong that the guys head snapped forward and his glasses fell off.”

“And then shoved him out of the chair, punching and kicking him to the ground, seriously hurting his back.”

“He openly bragged about his use of physical violence.”

And lest you think these are just the claims of those feeling wronged, Rathbun will admit it all proudly.

“I slammed him against the wall hard, and pinned his head…”

“I threw him across a table…”

“Rathbone” likes to think of himself as a good man, a kind man, a tolerant man, who grants the freedom of speech to all.

Unless, of course, it’s the free speech of a documentary crew covering him…

“You can’t do that! Marty!? That’s my personal property, Marty.”

Or asking him for an interview…

“Why don't you sit down and do an interview with me, Marty?”

Or just stating the facts.

And Rathbone, ever the “champion” of the oppressed and downtrodden, absolutely decries hate speech.

Except when he wants to engage in it.

Or use it to slander others…

Rathbone also professes to be a sensitive, spiritual man, who would never disparage the religion of another.

But wait a minute, isn’t that one of the most rabid anti-religious bigots in the world cozying up to him at her German anti-Scientology press conference?

The one who loudly supports the forcing of all German workers to declare they have no affiliation with the Church of Scientology … and the public branding of all firms hiring Scientologists with the letter “S”?

Who was repeatedly censured in both American and German courts for spreading lies and falsehoods … and condemned by the U.S. State Department for human rights abuses?

The one Rathbone previously referred to as a "fascist demagogue,” “bigot” and “hater,” who seeks nothing less than the complete termination of the Church of Scientology in Germany?

Oh yes, that’s her, flying Rathbone in who, now expelled from the religion, is a friend of any enemy of its Founder.

Not that any of Rathbone’s atrocities were his actions are his fault, mind you.

Because according to him Rathbone, you see, he was provoked…

Like that time when documentary filmmakers began quietly filming on public property near his Texas hovel.

He’ll pick fights with anyone, like in New Orleans, on his honeymoon no less, where in a drunken stupor, he threatened a bouncer and two cops.

After finally being subdued shirtless by police on horses normally used for riot control, he spent the night in the pokey, teary-eyed but none the wiser.

Even when he’s being arrested, handcuffed and booked for “assault with bodily harm” – there’s Kingpin Rathbone sticking to that well-worn story that, no, he wouldn’t even hurt a fly.

“Mosey, did you ever see me hurt anybody?”

Only, the mirror tells a different story:

“I heard her, she said don't look at her. You understand that?”

“Mosey, did you ever see me hurt anybody?

“And I’d like to know if marijuana smoking—smoking of marijuana… Ow! Jesus!”

Seems to be some inconsistency here. Rathbone says:

“Mosey, did you ever see me hurt anybody?

Guess his wife standing next to him also didn’t see this one:

“Hi, how are you? Just a couple of questions…”

By the way, the woman smiling sadistically at the assault?

She’s one of Kingpin’s cult cronies, which speaks loudly about the kind of company he keeps.

Because let’s face it, the members of Marty Rathbone’s so-called “posse,” are not merely his cult followers.

When it comes to violence, they are his “spitting” image.

Take, for example, Jason Beghe, a small-time actor with an apparent addiction to aggression.

He beat up an officer of the court and was found guilty of battery.

Then, he assaulted his own house guest—over a weed whacker—a beating that earned him tabloid headlines.

And speaking of violence, let’s not forget the peculiar brand of savagery dished out by Kingpin’s “best good buddy,” Mike Rinder.

Rinder had at one time played damsel in distress in one of Rathbone’s legendary beat-downs.

“He jumped Rinder, threw him to the ground and started strangling him.”

“He kept on choking Rinder, while also pounding his head against the floor repeatedly…”

“Several big men had to come over and pull him off because Rinder was going blue in the face.”

Even the notorious Ursula Caberta made him admit it.

“And I literally had him by the lapels and I was shaking him and bouncing him off the floor.”

In a bizarre twist, Rinder would become Rathbun’s biggest admirer, mirroring everything he did.

One of Rinder’s victims was his own wife.

And it wasn’t romantic passion that drove him to bear-claw her arms, shredding the skin and yanking one arm out of its socket, causing extensive nerve damage.

One year later, she underwent reconstructive surgery and doctors predicted it would take another six months to heal.

But when questioned about this cowardly attack on his wife, Rinder demonstrated a remarkable lack of compassion.

“Mr. Rinder, let me ask you a question. I interviewed your ex-wife, Cathy…”

“She showed me the marks on her arms where you gouged her arms.”

“Absolutely. And she needs surgery.”

“Do you have a business card?”

Even more recently, Rinder was caught on camera mauling a defenseless 71-year-old man until finally confronted and stopped by a passing fireman.

Wonder if he cares that assaulting a senior citizen is a felony in the state of Florida?

And remember the incident when Rathbone slammed the car door on reporter Jim Lynch?

The next time Rinder saw Lynch, this was his oh-so-sympathetic offer:

“Do you know what? I think you should stick your arm inside the car again.”

When Lynch went to see Rinder’s business associate, Stephen Reynolds, immediately afterward, violence again seemed to be the order of the day.

And this time, there was no denying the true nature of this group.

This is the vicious character of the south Texas militia-style cult headed by Marty Rathbone—and these are just the incidents recorded in medical reports, captured on video or reported to the police.

Rathbone will you tell you that he is the victim, while being the aggressor…

He will claim to be as honest as a choirboy… while telling lies that would make a con man blush.

And he professes to be peaceful, while initiating violence at every turn…

Of course, we know the truth—and so does he. 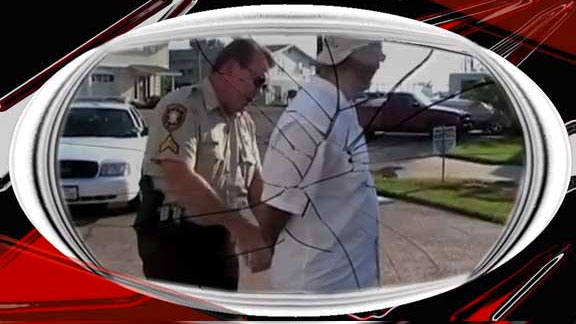