Meet Gibney source Sara Goldberg, the one who splintered her family by siding with a manipulative drug-using son, ignoring a daughter devoted to raising a child with special needs. Watch this video to see and hear what her own family has to say about her actions.

In his HBO film, Alex Gibney does the unforgivable by repeatedly exploiting an 8-year-old child while never seeking permission or even speaking with her mother. The mother of the child calls this “disgusting.” Instead, Mr. Gibney weaves a teary-eyed tale around Sara Goldberg and her blaming others about the break-up of her family. But watch what her own daughter and former husband have to say about it—she was the one who splintered her family by siding with a manipulative drug-using son, ignoring a daughter devoted to raising her child. What kind of grandmother selfishly puts herself and what she wants ahead of a devoted daughter and an innocent child? Moreover, what kind of a grandmother would insist on keeping a drug abuser around her granddaughter? Alex Gibney’s star.

But Alex Gibney’s idea of a documentary on the Church of Scientology?

Start with a book written by his buddy Lawrence Wright.

Then spend two years in secret turning that book into a film… and never once present any allegations to the Church.

And to ensure that the media would consider it tweet-worthy, include something new and sensational, tease the audience that a secret person not in the book will be revealed.

Someone the Church would have no chance to respond to.

Her tearful tale of a broken family playing a featured role in Alex Gibney’s documentary in which he casts her as victim.

And it hurt a lot of people.

This is the story of a family.

And Alex Gibney only allowed one of their voices to be heard… because anything any other family member had to say wouldn’t have fit the story he wanted his audience to believe.

“I was married to Sara for over 16 years and she in fact is the one who broke up our family.”

Sara Goldberg was in the center of a conflict between her daughter—a young wife and mother—and her son, who had been abusing drugs and alcohol.

Goldberg watched as her son’s behavior tore at the fabric of the family, ignoring the needs of her daughter Ashley who was struggling to raise a special needs child.

“Nick was making more money than my mother, yet she was paying his bills and not charging him rent and we were dealing with a serious medical issue with my daughter and we were paying rent…

“…and I asked her about getting Nick to pay her rent to help her, and she vehemently refused.

“When my son and daughter and my grandchild lived in Sara’s house, for which she was charging rent; the son would sleep all day, get up, come over to the kitchen, in front of me, take food off the table, stuff it in his mouth and then go out drinking.”

But Nick Lister’s destructive behavior would take an even darker turn when he began associating with that disgraced Texas cult leader, Marty Rathbun, and his henchman, Mike Rinder.

Lister used profits from his business to help finance Rathbun and Rinder’s bizarre failed plot to overthrow Church leadership, for their own personal gain.

It was during this same period that Nick Lister was arrested for DUI and drug possession.

“My brother was … not living an ethical life, living a criminal life…

“I was not going to condone someone who was manipulative and an alcoholic and had a drug use history.”

And when Lister bottomed out…

Ashley decided that for the safety of her young daughter, she would not exposé her family to any further contact…

She tore apart her family by joining with her drug-abusing son, who had been expelled by the Church for his amoral activities … not to mention his association with the violent and emotionally disturbed Marty Rathbun and his obsession with breaking up families.

Sara Goldberg turned to the media—tearfully blaming the Church for what she and her drug-abusing son did to break up the family.

But her former husband tells a far different story and exposés Sara Goldberg’s tale as “absurd.”

…by her actions and with the truth coming out, she’s guilty of what she’s saying somebody else is doing.

And it’s a lie in the extreme.

Alex Gibney could have spoken to Sara Goldberg’s family members…

Something any honest documentarian would have welcomed.

In fact, friends and family flew across the country to HBO headquarters to do just that.

“I went to New York with a group of people trying to get an interview with them so that I could state my feelings and we were denied.”

Alex Gibney doesn’t want to hear from the rest of the family.

And to make sure her story tears at the heartstrings of his audience, Alex Gibney does the unforgivable: At the film’s premiere he repeatedly exploits Ashley’s special needs daughter by including in his documentary personal family photos of the child…

“And I was never asked if it was okay to use my daughter’s photograph.

“Absolutely not okay with me. It was not me or my daughter who caused this. It was her and my brother.”

So here’s what we have: Alex Gibney, refusing to inform the Church of Sara Goldberg’s claims…

and taking advantage of Ashley’s special needs daughter to generate sympathy in support of his fabricated storyline.

This is not the work of an honest journalist.

“I think we got the story that we wanted.”

The story Alex Gibney wanted – a malicious work of propaganda presented as fact.

anything that doesn’t fit the story he wanted…

while including only the long-discredited fabrications of his hand-picked crew of bitter expelled Church members and their cronies.

Remember this guy – the leader of that tiny failed cult who turned Sara Goldberg and her son against their family?

He put a fist in his wife’s face right before he abandoned her.

You’ll also meet those this man calls his “posse”: His minion, Mike Rinder – this guy deserted his children…

and ruthlessly beat up his estranged wife.

Then there’s the thief who abandoned his wife, but not before he blew through her inheritance without her knowledge.

And another Alex Gibney source, the drama queen who began a secret affair with one of her business clients, destroyed her marriage and turned her two children against her husband.

Alex Gibney could have shown you the truth about Scientology.

But instead of showing you this, Gibney has chosen to give you this man…

That’s right, this guy is the leader of all Alex Gibney’s "sources."

All of them handpicked to populate the story that Gibney wants to tell.

Alex Gibney knows full well who these people really are. 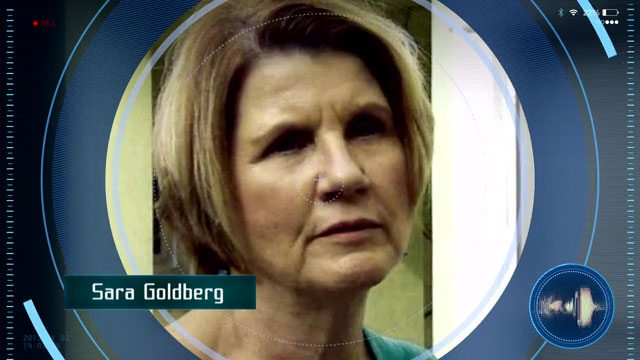