Just like he has done with his one-sided movie on Steve Jobs—decried by film critics as mean-spirited, heavy‑handed and lazy—Alex Gibney’s film on Scientology ignores any facts that don’t fit with his preconceived story. Day after day, letters flooded into Alex Gibney’s office to make one simple request: Provide a fair opportunity for the Church of Scientology to respond to the allegations he planned to make in his film Going Clear. But that is not part of Gibney’s malicious modus operandi.
He is a propagandist to his very chilling core.

Alex Gibney went out of his way to avoid talking to anyone with accurate information about the Church and its members. Even after receiving numerous offers from the Church representatives, attorneys and friends, family and associates to provide documents proving the falsity of his sources, Gibney continued to stonewall. Gibney refused to listen. He already had the story he wanted.

A strange thing about Alex Gibney’s “documentary” on the Church of Scientology, he interviewed no actual Scientologists.

In fact, for the two years he spent secretly working on the video, Alex Gibney went out of his way to avoid contacting the Church, visiting a Church or speaking to any of its members.

Instead choosing to interview a small group of individuals he well knew were expelled by the Church for malfeasance, incompetence and violence.

In other words, precisely the sort of people that don’t represent the Church.

It wasn’t until his film was in the can that Alex Gibney even bothered to mention it to the Church.

On November 6, 2014, Church officials sent him this letter asking for any specific allegations and who made them.

But no response from Alex Gibney.

On November 11, the Church sent him another letter.

But again no answer from Alex Gibney.

November 14, another one, again, no response.

Two on January 20, no answer to either one.

A dozen attempts to reach Alex Gibney, no response, except for one curt email from Alex Gibney declaring: “I don’t provide the names of my sources in advance of the film’s premiere.”

But Gibney wasn’t the only one stonewalling the Church.

There was also Sheila Nevins, HBO’s president of documentaries.

She too was sent letter after letter reminding her of HBO’s editorial obligations.

This one on December 16.

Then another on December 24.

And another on February 18.

The response from Nevins.

So, the Church was left to guess who Gibney’s sources were for his so-called “documentary.”

The only clue being that it was based on a book by Gibney’s pal, Lawrence Wright.

A book that had long been discredited by such falsehoods as Wright quoting as a source someone who had actually never been interviewed or even heard of Wright. Nevertheless, guessing at which of Wright’s disreputable and discredited sources might appear in his buddy’s film, friends, families and former colleagues also sent letters asking HBO to listen to them because they had evidence utterly refuting the credibility of Wright’s sources that might now be Gibney’s actors.

There were even letters from the Church’s attorneys, who played integral roles in the Church’s many legal victories against religious discrimination.

But all of these requests from the Church, its attorneys and its parishioners, four dozen in all, fell on deaf ears—without a single response or answer from Gibney or Nevins.

However, there was one communication, less than two months before the film’s first scheduled showing, not from Gibney or Nevins, but from an HBO lawyer: “…if you have individuals with first-hand knowledge who were personally involved and are willing to share their experiences, we encourage you to make them available immediately.”

But because both HBO and Gibney still refused to tell the Church any content of the film, the Church again had to guess at who might be “personally involved” and have “first-hand knowledge” of what Gibney was keeping a mystery.

Nevertheless, the Church wrote back, accepting the offer.

And so 25 people “personally involved” with the disreputable individuals the Church was guessing were Gibney’s sources—traveled from across the country to see Gibney and HBO.

The Church wrote and e-mailed Gibney and HBO weeks in advance that they would be coming.

Yet, when they arrived, Gibney and HBO refused to meet—even though they well knew these individuals had come great distances to see them.

These 25 people waited for the meeting in offices just a block from HBO headquarters.

Gibney and HBO knew they were there and knew precisely where they were located.

Gibney refused to answer the phone.

Gibney and HBO refused to meet, let alone hear anything the Church had to say.

But as it turns out, the Church had correctly guessed who Gibney’s sources were—though Gibney refused to confirm it.

The 25 people Gibney refused to meet couldn’t have been more relevant in responding to Gibney’s one-sided hatchet job: The wife and daughter of Mike Rinder—Gibney’s primary source—a family he abandoned and a wife he beat up and put in the hospital after she tried to reconcile.

The wife of Marty Rathbun, who he abandoned after putting a fist in her face.

And the wife of Tom DeVocht, who he dragged across the ground by her hair after being caught out on a criminal million-dollar real estate scam.

Three violent men expelled from the Church for their misconduct, quoted without scrutiny by Alex Gibney—yet Gibney deemed the three victims of their abuse “irrelevant."

As were the husbands, wives, brothers, sisters and children of no less than seven out of the total of eight sources Gibney used for his video.

Gibney also refused to meet senior Church executives, including: The Trustee and Executor of the Church Founder’s estate.

A half-dozen senior Church executives, all of whom presided over the justice proceedings expelling these miscreants.

As well as another dozen co-workers, ALL deemed “irrelevant” to a Gibney propaganda production.

Alex Gibney used none of it.

He refused to even hear from anybody except bitter, long-expelled apostates and, instead, in an affront to legitimate journalists everywhere,

Of course, considering Gibney's “pedigree,” this is no surprise.

His father, Frank Gibney, was on the face of it a “journalist.”

Obviously, the apple doesn't fall far from the tree.

Because just like other propagandists, Alex Gibney told the story he wanted to tell.

The story he wanted. 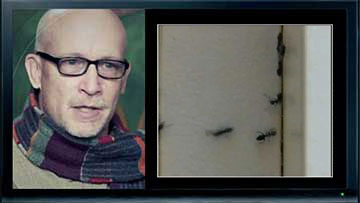