Alex Gibney’s film dissections are revealed here showing how his “docudrama” Going Clear: Scientology and the Prison of Belief, was conveniently sliced to help one of his sources lie.

Watch how with surgical precision Doctor of Propaganda Alex Gibney cuts and slices videotaped footage so his “docudrama” can help failed Texas cult leader Marty Rathbun lie. Desperate to shore up gaping holes in his one-sided bigoted film, Gibney conveniently slices out footage from a stale allegation Rathbun made five years ago that was thoroughly debunked to make it seem like it’s fresh and new. The Gibney editing scalpel also was at work removing any and all references to the long history of violence practiced by Rathbun and his gang of thugs lest anyone discover the volcanic tempers and explosive anger that has left a long trail of bruises, cuts and medical bills. No matter that Gibney’s actions violate the fundamental ethical guidelines of journalism. When it comes to propaganda, the doctor is in.

HBO is promoting filmmaker Alex Gibney’s “documentary” on Scientology as part of its block of “Original” programming.

Original as in: pure fiction.

It’s also biased and deceitful, without a shred of actual journalism—something you might expect from a piece of tabloid propaganda.

Considering Gibney’s “pedigree,” this is no surprise.

His father, Frank Gibney, maintained a public persona as a journalist.

Apparently the apple doesn’t fall far from the tree.

Gibney’s method—ferret out a rash of false claims and bizarre allegations in the service of a prejudicial agenda and anything not supporting that tale—forget it, ignore it or throw it out.

Or just falsify the “evidence.”

Take one absurd claim made by Marty Rathbun—the leader of a tiny failed Texas cult.

Rathbun, expelled from the Church of Scientology more than a decade ago for incompetence, lying and violence.

But Alex Gibney goes out of his way to dust off video footage of him from a cable TV show aired five years earlier then drops it directly into his film as if it were breaking news.

Footage with Rathbun making this incendiary bit of sensationalism:

“And if it wasn’t him doing it, it was from him inciting others to do it to others.”

Alex Gibney doesn’t use his own interview with Rathbun to make that accusation.

Because Rathbun couldn’t repeat it, since his bogus claim had already been proven utterly false in an eight and a half-minute video.

A video that has been posted online for five years and distributed in a hundred thousand magazine copies.

One that definitively proves with documentary footage that the person against whom Rathbun directed his allegations wasn’t even there.

And so, to get around the inconvenient fact that Rathbun’s tale was provably false Alex Gibney doctored the tape.

Slicing off the beginning of the video clip—the part that time-stamped Rathbun’s phony claim and proved it was a lie.

And in so doing, Alex Gibney manufactured a scenario he hoped would smear the Church and its leadership.

Altering video to mislead the audience is one of the more egregious violations of journalistic ethics.

Because also appearing on that same cable show were the former wives of the accusers.

They testified that not only was Rathbun’s allegation untrue, but it was actually he and his cronies who were doing the beating.

In 2003, it came up that Marty Rathbun had been mistreating others.

Marty Rathbun suddenly went and leapt on top of Mike Rinder, and fought him to the ground and started choking him and beating him.

You do have written declarations that Marty Rathbun was a violent man.

He was a violent, psychotic man.

But Alex Gibney intentionally leaves out Rathbun’s violence, only mentioning it long enough to accuse these women of making the whole thing up.

But Gibney knows they were telling the truth.

Because true to form, he once again “doctored the tape”—ignoring another inconvenient sound bite from that same cable television show—where Rathbun admits to his violence.

“And I didn’t come in here ever telling you I was Little Lord Fauntleroy and never did anything wrong.

But here, Rathbun is being less than candid.

For this “I’m no Little Lord Fauntleroy” is in fact an emotionally disturbed and vicious man, given to bouts of sudden and extreme violence.

He is notorious for punching, kicking, spitting.

As in his run-ins with this documentary film crew:

- “Shut the fuck up, I’m telling you something right now mister. Do you hear me?!”

In this violent outburst, Alex Gibney once again “doctors the tape” by spinning Marty Rathbun’s subsequent arrest for assault as no big deal.

Declarations signed under penalty of perjury document that Rathbun has committed at least 40 other acts of battery.

And Alex Gibney had all of this information at his fingertips.

Yet none of it managed to find its way into his so-called documentary.

Because once again, Alex Gibney “doctored the tape.”

He didn’t even mention Marty Rathbun’s beatdown of Mike Rinder.

A beating so savage Rathbun would have killed him had five men not pulled him off.

A beating that Rathbun later had to admit to in front of government authorities.

“And I literally had him by the lapels and I was shaking him and bouncing him off the floor.”

But in a bizarre twist, Rathbun later made Rinder second banana in his now-defunct “Independent” cult, even anointing Rinder the first, and only minister in the Church of Marty Rathbun just so Rinder would preside over his wedding.

After which, Rathbun honeymooned in New Orleans, where he threatened a bouncer and two cops—and spent a night in jail.

But Alex Gibney doesn’t mention this in his documentary, either—because he “doctored the truth.”

Just as he surgically removed Mike Rinder’s own violent streak.

Rinder himself has committed a string of assaults, primarily against women—one of them his wife, who he left with a permanent disability.

Alex Gibney also “left out” the fact that the three other men prominently featured in his documentary have a history of severe violence, as well: Here’s Tom De Vocht, who went on punching sprees with Marty Rathbun.

Before De Vocht abandoned his wife, he dragged her down a hallway by the hair.

Jason Beghe, who attacked his gardener over a weed whacker.

He also beat up an officer of the court, was convicted of battery and had to pay $19,000 in restitution.

And Paul Haggis—he kept it in the family, assaulting his own sister.

Do the backgrounds of any of these “prized sources” rate a mention by Alex Gibney?

That’s not the way this doctor operates.

His is the mission of a propagandist—to ruthlessly do whatever it takes to get his audience to think what he wants them to think.

And so, Alex Gibney “doctors” it all.

To stitch together a tale that looks nothing like recognizable fact.

It's not truth. It's Alex Gibney. 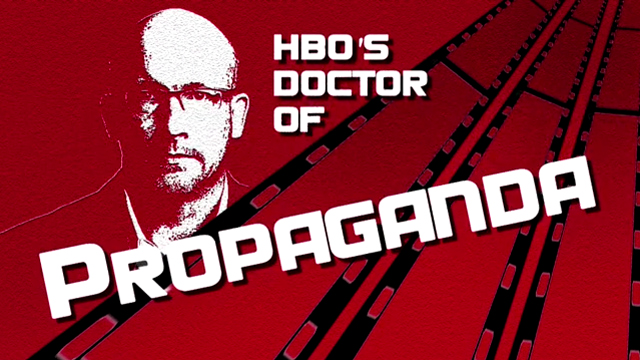